Aim for the Strongest Team!

As the name suggests, in the Aim for the Strongest Team! event, you will aim to create the strongest possible team of 7 uma musume. The catch is that you can only use one of your characters, and the other six must be scouted during the event.

At the beginning of the event, you will be prompted to select your captain. This can be changed at any time, so don't worry too much about it. 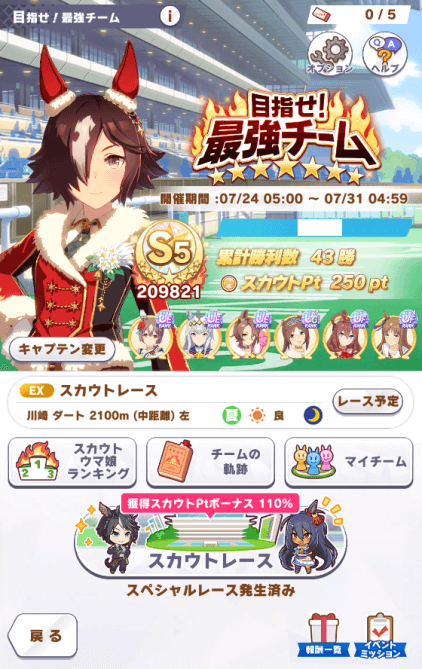 After selecting your captain, you will be greeted with a menu similar to this one. Your captain (in this case Kitasan Black) is on the left, and your six scouted uma musume can be seen below.

At the beginning of the event, you will start with six low-ranked NPC characters (around rank D), and your goal is to scout high-ranking horse girls (in the example, Mihono Bourbon was already scouted).

The first (left) button in the main menu shows your progress towards the event reward. Think about this as your Team Stadium rank—getting higher ranked characters in your team increases your average team score, which is what you're after here.

The second (middle) button shows your Uma Index and Team Skills in two different tabs. Let's have a look at these separately. 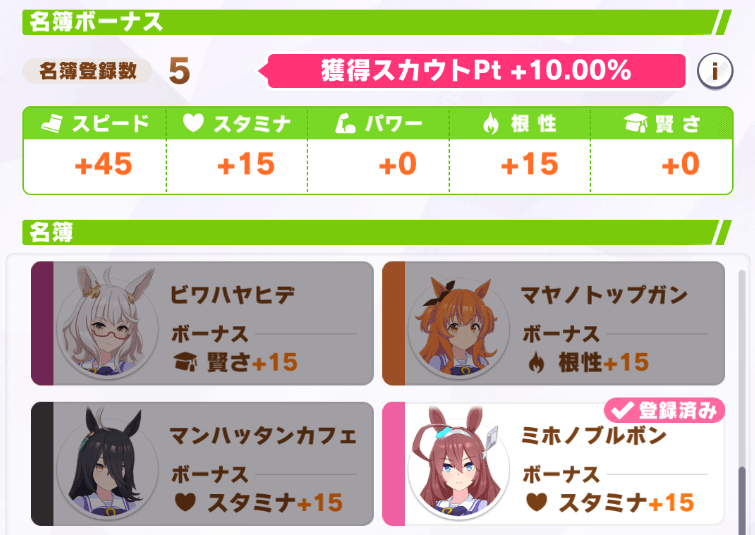 The Uma Index is a list of all characters that you've won at least one event race with. Every such character will grant permanent bonuses to your team. Both your captain and the scouted characters count for this, so if you don't have a particular character, you can always try finding her throughout the event!

The team skills are gained by racing with specific combinations of characters in your team. These also provide permanent bonuses for you. The catch here is that, of course, you can only select one of the characters, and the other one will have to be scouted during the event.

Back to the main menu, the third (right) button shows your current team. Your captain can be changed there.

And as you might have guessed, the big button starts a race. One race uses one ticket, and you can get up to 15 per day—5 during the daily reset, 5 from a daily mission, and after you run out, you can recharge another 5 with RP jelly (or jewels). 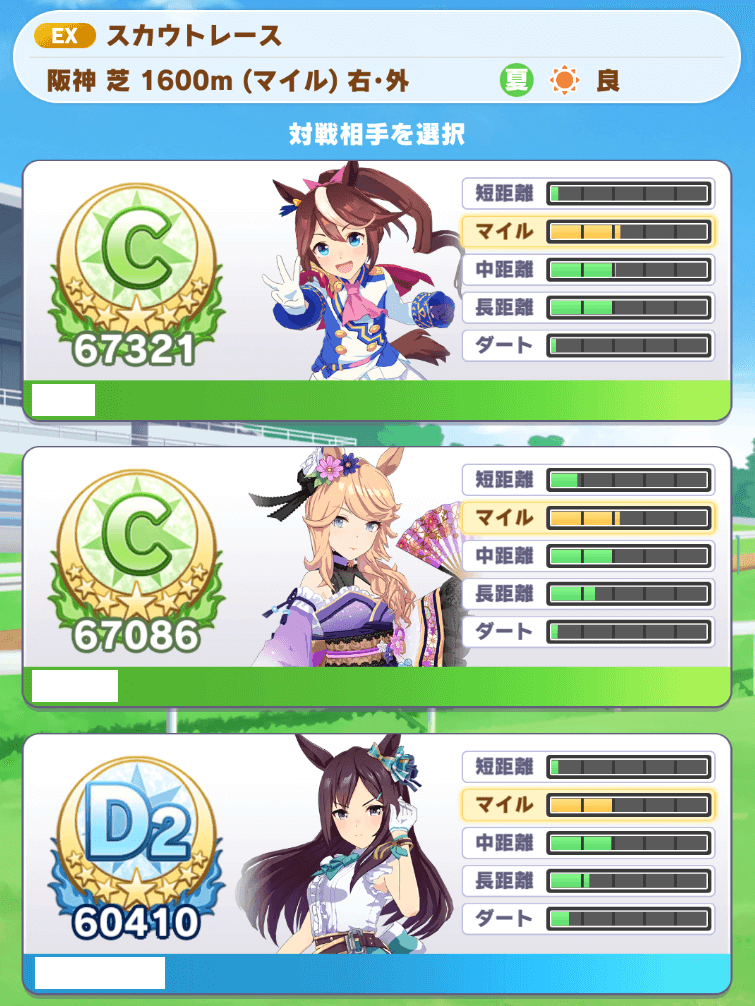 After clicking the race button, you will be greeted with a screen similar to the Team Stadium one. Select one of the three players to race against—you can choose from a higher ranked one, a similarly ranked one, and a lower ranked one.

On top of that screen, there's also information about the race you will participate in. Please note that the parameters change every three races, so make sure your captain is always selected appropriately (or that the rest of your team can handle the race). If you try to run a race with an unsuitable captain, you will be greeted with a prompt similar to the one below. 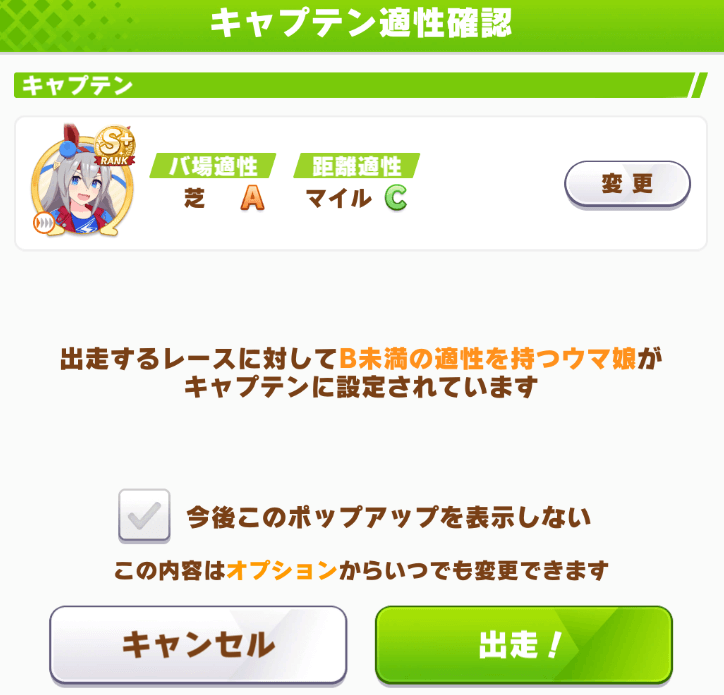 After that, it's race time. Similar to the Team Stadium, it's all or nothing—uma musume in the first place will bring glory and victory to her trainer, and the other team loses.

You can also use clocks in this event, so don't worry too much if bad motivation makes you lose a race. 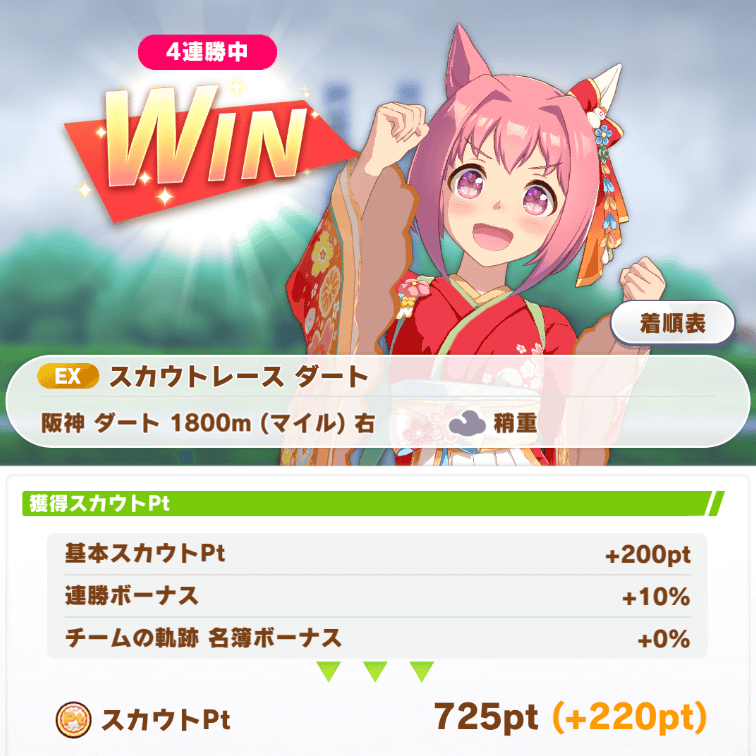 After a race, you will be awarded Scout Points. The amount will depend on your opponent's rank, your win streak, your Uma Index completion (10% for every 5 characters), and of course, whether or not you actually won the race. 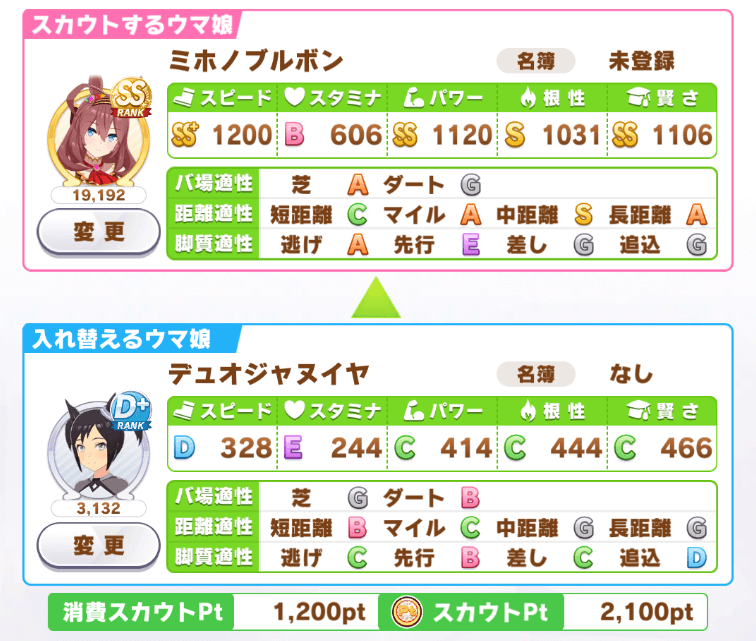 If you win the race, you will be finally able to scout! By spending Scout Points, you can exchange one of your characters for a character from your opponent's team. I say "exchange", but it's more like "making a copy"—don't worry, there's no actual horse girl stealing involved in the event.

And there you have it—the scouting event! Make sure you always have a captain adequately selected for the race (or someone you still need for the index), win races, scout opponents' uma musume, and have fun!