"Why did my losing long-distance team get a better score than the winning dirt team? I don’t understand this at all."

If you’ve ever had thoughts like that while pressing “skip” in the Team Stadium in Uma Musume, this article will try to answer your questions.

We will break down the score you can get in PvP, and check what exactly affects the individual factors.

First of all, let’s talk about score modifiers. If you read this article further, you’ll learn that finishing first will get you 10,000 points. However, on the score details page, you might notice that you actually got much more than that. So what gives?

In reality, all the scores discussed in the sections below are base scores. They then get further modified by extra bonuses - in particular, Ace Bonus, Opponent Bonus, Support Bonus, and Consecutive Win Bonus.

Ace bonus is probably the simplest one of them all. Your ace character will get an extra 10% bonus for all scores she manages to obtain. 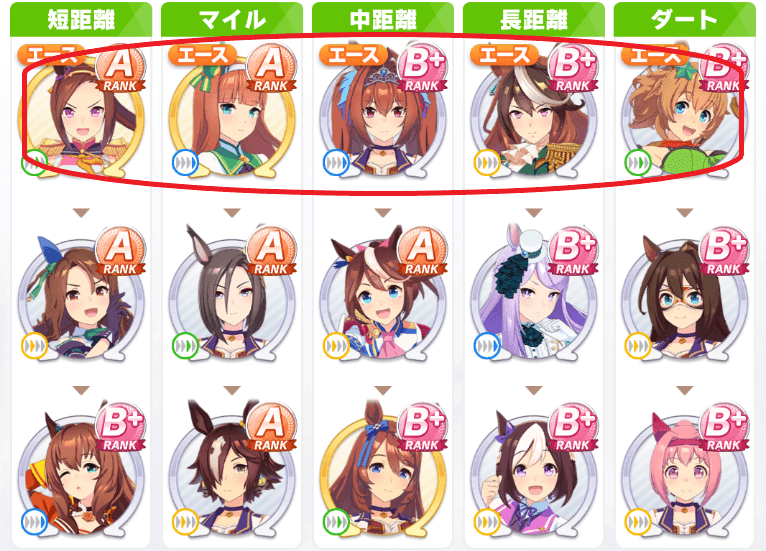 To clarify, “ace characters” refer to the characters listed in position 1 on every team - they also have an “エース” label on the character selection screen. So, to maximize your scores, you always want to put your strongest girl in the first position.

By competing against stronger opponents, you will get more points. This bonus is pretty significant, and racing against high-rating opponents with questionable builds is the most ideal thing you can do in the Team Stadium. Now only if such opponents were that easy to find.

This bonus will vary wildly depending on what rating range you’re racing in. If you want a ballpark estimation, it’s about 50% when competing against a 100,000 team rating player, and around 80% at 150,000. So yeah, pretty significant.

This one refers to the bonus you get from leveling your support cards. You can see the total amount, including a breakdown of it, on the main Team Stadium screen.

This bonus is usually a few percent tops. However, you shouldn’t neglect to upgrade your support cards in the first place, so hey, free points.

Every match in the Team Stadium consists of five races, and you can get this type of bonus by winning several of them in a row.

For example, if you’re on a win streak of three, every character participating in the third victory will get +3% to their score. Pretty easy to remember.

A vast majority of the points available in a PvP match are won by the individual performance of your girls. However, there are some ways to score a few extra points for the accomplishments of your team as a whole.

If you defeat your opponent by winning three or more individual races, you will get a bonus of 10,000 points. This is (obviously) awarded after all races are finished, on the match result screen.

The only score modifier that applies here is the Opponent bonus. For example, if you’re doing a match with a 60% Opponent bonus and win, you will get a total of 16,000 points for the victory.

A match consists of five races, and you can get an extra bonus for the overall rankings of your horse girls in each of these races.

1･2･3 Finish, sometimes called Trio or Trifecta from the horse betting terminology, means that your uma musume team completely swept the race and took the top 3 places. If they manage to do so, you'll get an extra 5,000 points.

There's also a thing called 1･2 Finish (or Quinella), but this bonus only applies when you fielded two characters in the race. This is a bonus that can be found in lower-tier classes, where you're limited to two uma musume per team. If you only raced with two characters instead of three and they managed to snatch first and second places, you'll get a 3,000 points bonus.

If you just didn't make Top 3 with everyone on your team, you don't have to be too sad. If all three of your characters managed to finish within the top five spots, you'll get a 4,000 points bonus, and that's still very good.

Just to be completely clear, you can either get a bonus for Top 3 or Top 5 - it's not possible to get both.

One of the biggest factors in uma musume's individual score is, by no surprise, how well she did in her race. What might come as a surprise though is how exactly is this calculated.

This is the more straightforward part. Depending on what position a character ended the race in, they will get a set amount of points. You can see the actual values in the table below.

The second part only applies to the horse girl that finished her race in 1st place. When that happens, she will get another bonus - and this one will depend on how big of a margin she won by (the distance between 1st and 2nd place).

This is probably the weirdest part about the entire PvP score calculation. If you look at the table below, you either want the race to be extremely close, or extremely one-sided. Anything between that awards significantly fewer points.

I guess it kind of makes sense if you think about this as how exciting the race was. Nail-biting, super close races are the best ones to watch. The overpowered uma musume that beats everyone by 20 lengths makes for a pretty amazing story as well. Results that fall somewhere in between of those can feel a bit too normal in comparison.

So yeah, it kind of makes sense, but it’s still pretty unintuitive.

It means that skill point-wise, it’s better to buy a golden skill upgrade, rather than another normal rarity skill. They’re also usually better than two normal skills of the same category when it comes to strength anyway, so getting golden skills is usually a good idea in general.

The scoring of unique skill activation is a little bit more complicated, ranging from 1,500 to 3,000 points. It depends on the level of the skill, and on the rarity of your character.

The base score is 1,500 for a level 1 unique skill when using a low rarity character. Level 2 is worth 1,700, and then an extra 100 points for every level beyond that.

As you may know, the unique skill of a horse girl gets upgraded when she reaches 3-star rarity. You will also get a bonus in PvP for this - activating an upgraded unique skill is worth 500 more points compared to 1 and 2-star characters.

This one is very often misunderstood. The Japanese name literally wants you to have a “naisu position”, but it doesn’t have anything to do with your positioning skills.

What your characters need to do is to be ranked 1st among the horse girls with the same strategy. So, if your uma is a betweener, she should be in front of all other betweeners.

Every race track available in the Team Stadium has a predetermined time value, known as “Standard Time”, or “Reference Time”.

If you’re familiar with real-world horse racing, then you might know the term. In layman’s terms, it’s basically a benchmark for the particular race - the time a horse is expected to finish the race in.

Don’t you just hate late starts? Well, the good news is, if your uma musume has an exceptionally good start, it will be properly rewarded in PvP!

Start Dash is a PvP bonus for having a very low delay at the start of the race.

The delay at the starting gate is believed to be completely random and not affected by your stats. The probability of a late start is about 20%, with the start dash being 20% as well.

The good news is that you can directly affect the chances with Focus and Concentration skills. Focus will multiply the starting delay of your character by 0.9, while the golden Concentration will multiply it by 0.4. Activating the latter one thus makes late starts impossible.

If your uma starts the race as 8th favorite or worse, and ends up in 3rd place or better, you will get a bonus of 4,000 points (a "dark horse" bonus).

While that amount is certainly sizable, specifically aiming for it would require gimping your build, and is generally not worth it. And, of course, you then have to actually place well with the relatively weak character. You will probably not encounter this bonus very often.

Kakari (掛かり), sometimes referred to as panicking, is a negative effect that has a random chance to happen to any character during a race. The chance can be lowered by having a high intelligence stat.

Being affected by this status effect will negatively impact your score. It’s currently the only penalty that’s possible to get in Team Stadium.

There are two parts to Kakari scoring. First is a flat penalty when you get afflicted by it - you will get -500 points.

The second part depends on how long your character was affected by it. For every second of being panicked, you will get another -100 points. The maximum amount of time kakari can last naturally is 12 seconds, however, this can be further extended by enemies’ debuff skills.

"Hey, you didn't answer the question!" 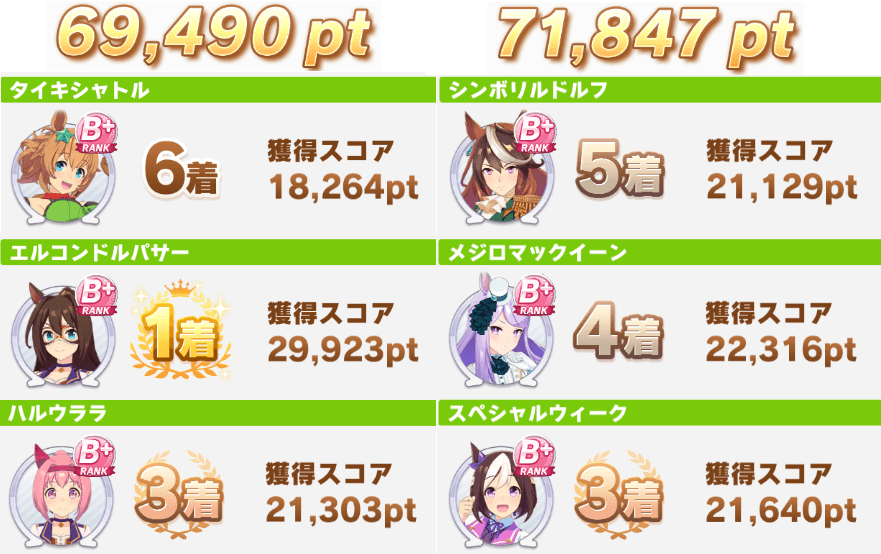 Don't worry, I was just getting to it. So, why did the losing long-distance team get a better score than the winning dirt team?

After a match is finished, you can look at the score details by clicking on the "スコア情報" button. Not only can you see what character got how many points, but also for what.

If you look at the picture, there are several problems apparent just from observing the overall individual results.

The first thing is that everyone on the losing team actually finished within the top 5 places, and thus got an additional bonus for a good team result. El Condor Pasa managed to score a win for the dirt team, but Taiki Shuttle ended up outside of the top 5. Good team balance is important.

Taiki Shuttle also got a low individual score. She did activate her unique skill, but that's about it - she ended up 6th, only activated one golden skill, and didn't get any nice position bonuses.

Just so you don't feel like I'm only bashing Taiki Shuttle here, there's another small problem with the dirt team. El Condor Pasa and Haru Urara both ran well in the race, however, they have the same strategy.

If they had different strategies, they could both get their own bonus. With the same strategy, girls on the same team kind of compete against each other. For every duplicated strategy on your line-up, you're potentially losing out on almost 4,000 maximum points with bonuses included. And that's huge.

You can't see that on any of the pictures, but the long-distance team also got more points for unique skill activation. Not only are their skills more leveled, but they're also all 3-star rarity. Haru Urara and El Condor Pasa both got 500 fewer points because they're only 2-star. It's not much, but it all adds up.

Overall, in this case, it was mostly Taiki Shuttle who really brought the team down, in more ways than one. Not only did she get a very low personal score, but she also finished just out of Top 5, and made the dirt team lose out on any kind of a team bonus.