This guide will list the updates made to the URA Finals scenario during November 2022. Most of it will be about a new mechanic, and the rest about updated training events and stat gains. We plan on expanding this into a full-scale URA Finals scenario guide at a later point in time.

These duels are the biggest addition to the scenario. Training facilities will now randomly include Happy Meek. When there is an orange mark with 対決 on her icon, carrying out this training will trigger a new training event where you can duel her. Failing the training will not start a duel. 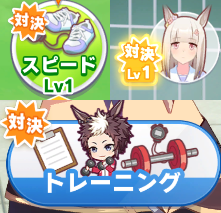 You'll be given three choices. The first one will always be the stat type that triggered the duel; the other two will be random choices picked from the five stat types and Energy (体力).

Each choice will also show your chances to succeed at the said duel, indicated by the usual ✕, △, 〇, and ◎. Succeeding will raise Happy Meek's level for the next duel and award you with the following:

Losing a duel will award 5-15 of the targeted stat depending on the level and 5 SP.

Here is a list of all obtainable Essence of Racing skills:

An inheritance factor for each of these new skills also exists. They have a common and an enhanced ("+") version, each going from 1 to 3 stars as usual. The common versions simply grant hint levels for the respective skills, while the enhanced versions will also grant some of the respective stat (or SP in case of the factor).

What decides whether you can get the normal or plus factor is still under investigation, but it might be related to maxing out Happy Meek's level and winning against her in the URA Finals Final race.

The difficulty of these duels scales with Happy Meek's level. Winning 5 duels will max out her level (displayed as "Lv MAX" in the duel icon), causing a strengthened version of her with a blue-glowing aura to appear in the URA Finals Final race. Similar to legend races, there will be a cut-in before/after the race.

She will have the following aptitudes, skills, motivation, and something in the range of the following stats (specifics can vary by ±10 in each stat): 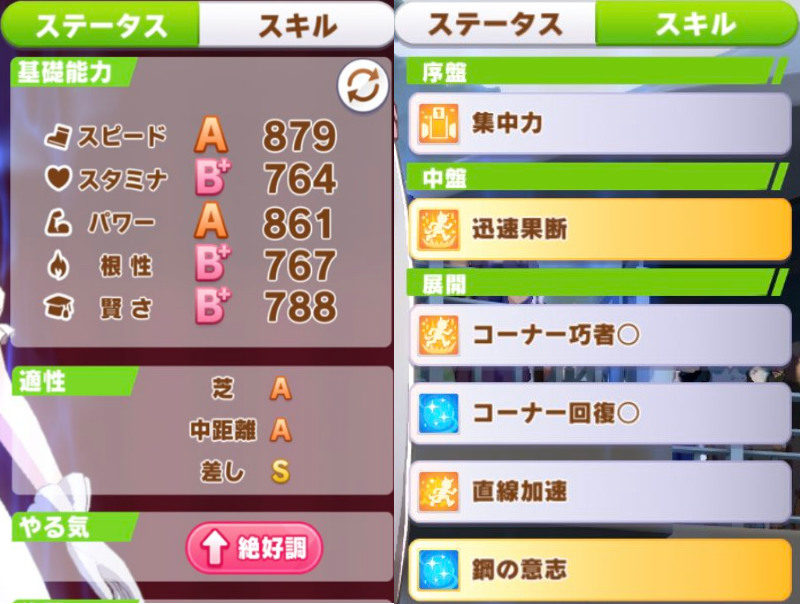 Winning against this powered-up Happy Meek will affect the 「URAファイナルズ決勝の後に」 training event that occurs at the end of the run. It will now award you with a hint for the scenario skill, as well as giving you 20 of every stat and 150 SP (these values are affected by race bonus). Your chances of receiving the URA Finals scenario factor will also be raised.

If you don't trigger her appearance, the event will instead award 10 of every stat as well as 80 SP (also affected by race bonus) with no hints given.

There is now a training event featuring Chairman Akikawa called 「アツい差し入れ」, which is guaranteed to trigger at the end of Late July (halfway through the summer camp) during both summer training camps. This event will restore 30 energy.

The training events at the end of a run have been adjusted to give more rewards (stats and skill points); the values are currently under investigation.

The new base training values, as well as the difference from before, are as follows: