Aoharu Hai was once a traditional team competition at Tracen Academy. However, the tides of time have not been kind to this event, as it hasn't been held in a long time...

At least until now. At the request of the students, the Aoharu Hai is to be revived, and Uma Musume that were once rivals will join hands in this exciting competition!

At the same time, Chairman Akikawa has been called away on a long-term business trip overseas. The strict-looking URA executive, Riko Kashimoto, has been appointed as the acting chairman. Dark clouds begin to gather over the Tracen Academy... 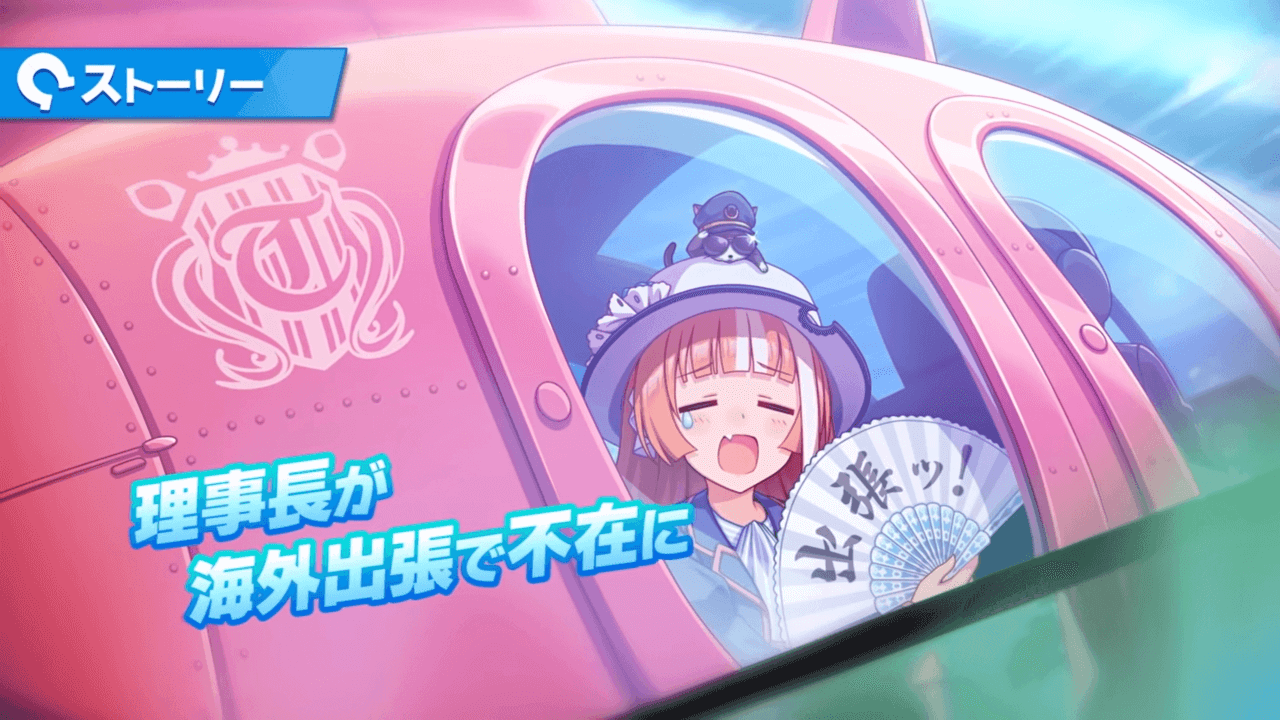 As it builds on many of the mechanics from the first scenario, this article assumes you know the basics of playing the game. If you do not, please read the Beginner's Guide beforehand.

Unlike the URA Finals, where you only focus on training one character, Aoharu Hai focuses heavily on team tournaments instead. So your main character will not be the only one you'll be cheering on during the races!

Aoharu Hai can be selected in the main training menu, before choosing the trained uma. You can switch freely between Aoharu Hai and URA Finals before every training session.

In the final Aoharu Hai race, you will compete against your rival team called First, which was founded by the acting chairman, Riko Kashimoto (Romi Park).

Her team will consist of Uma Musume original characters, and two of these have already been revealed - Little Cocon (Saho Shirasu, on the left) and Bitter Glasse (Aino Shimada, on the right). 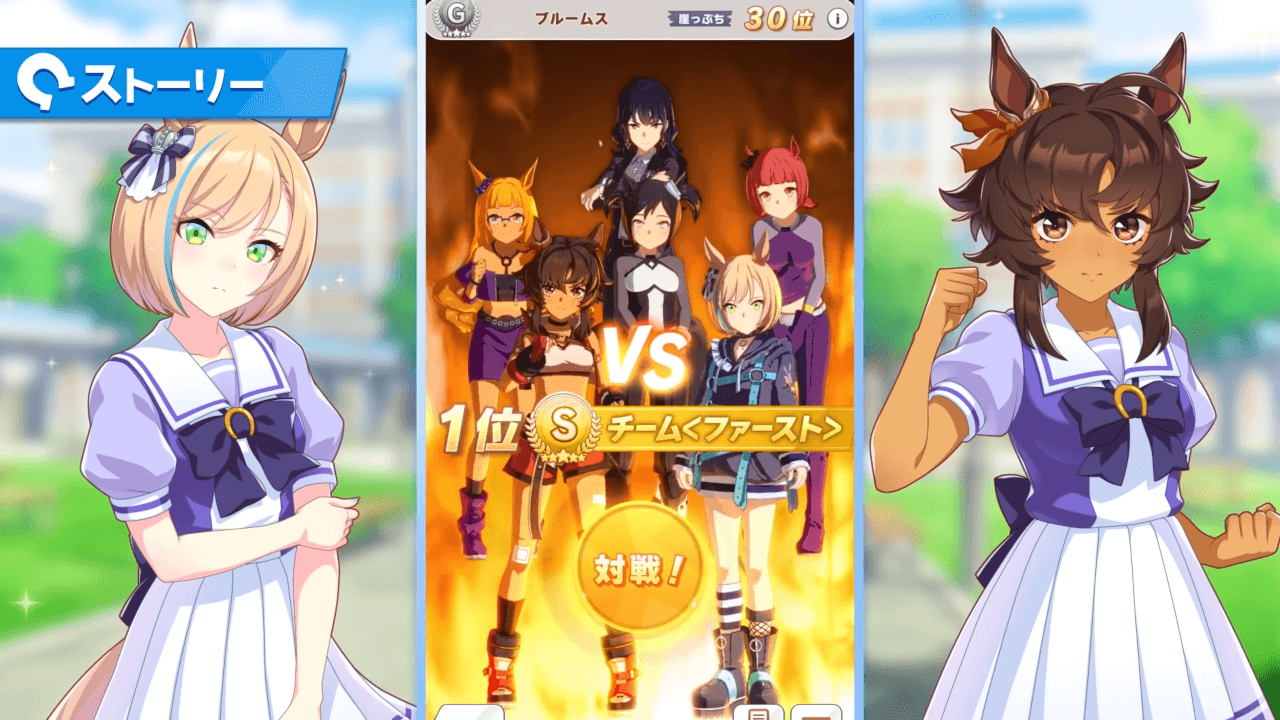 Differences between the Aoharu and URA scenarios

For the most part, you can think of Aoharu Hai as URA Finals with an extra sprinkle on top. The schedule is mostly the same, as are objectives and optional races, and you will even still run in the three URA Finals races at the end of the run.

There are new mechanics added to this mode though, and basically all of them revolve around team racing, more specifically to the Aoharu Hai.

Aoharu Hai is a team competition that will happen once every six months of a training run. It's very similar to the Team Stadium, and you will be doing five races in each of the tournaments. Thus, it will be important to pay attention not only to your main character but to the entire team. 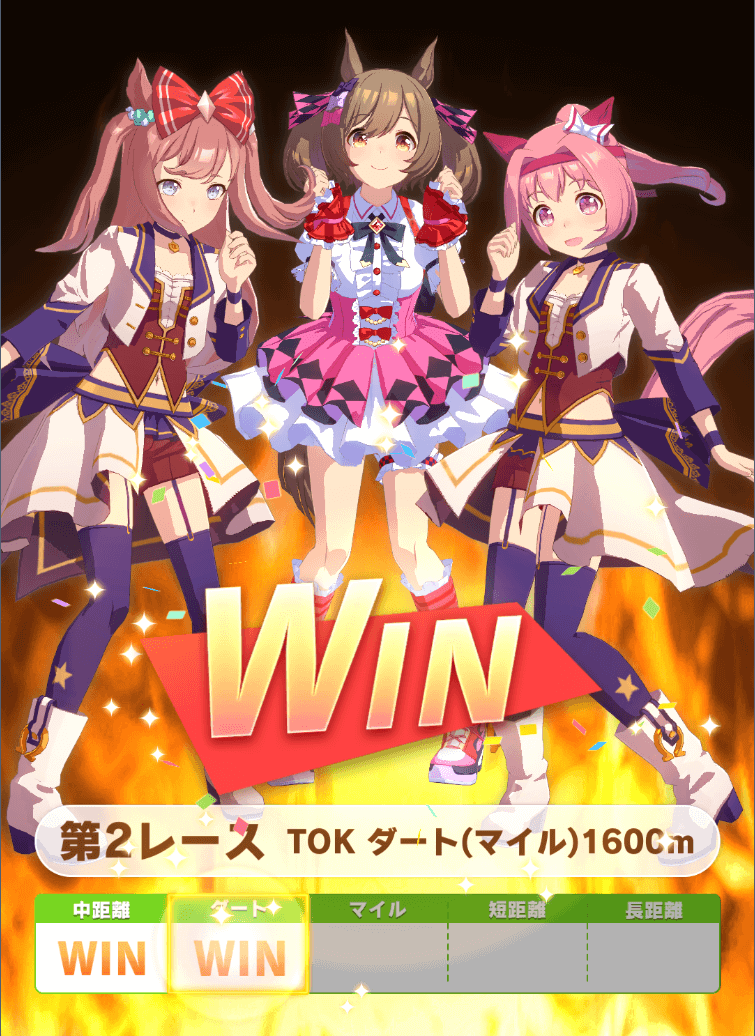 Another important difference is that your training (facility) level does not increase by simply using it as before, but it's now tied to your overall team rank.

From the meta standpoint, Aoharu Hai so far feels a little bit more volatile than the previous scenario, and it has a potential for both lower and much higher rolls than URA Finals. The final stat distribution spread might be a little bit more difficult to control, too. If you're already able to make A+ umas in the first scenario, this might be a good chance to go for that first S-ranked character.

Do note however that Aoharu Hai takes slightly longer on average, which is likely to make the URA scenario a better choice for inheritance or fan farming.

As you probably know, the URA Scenario has its very own (and very strong) race factor that can be randomly obtained after winning the finals, giving speed and stamina on successful inheritance.

The Aoharu Hai scenario has the following base stat caps:

Aoharu has different stat gains from URA. These are the values for the two scenarios at facility level 1 with no supports on the training.

This section will describe the new mechanics from Aoharu Hai in detail.

There is also an ingame event with Tazuna acting as a tutorial a few turns into the run, but it won't be covered at length here. Just know that the first choice will allow you to ask Tazuna more questions about the Aoharu Hai, and the second will let you move onto the run. 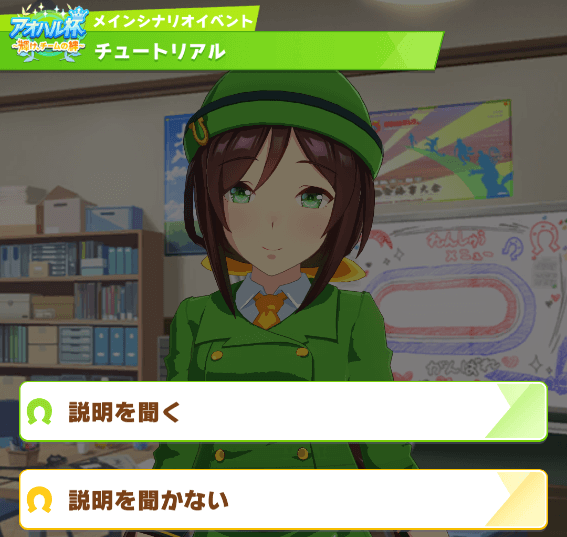 Of course, what a team competition needs most is team members. Thankfully these are not hard to come by during the Aoharu Hai.

In addition to the characters of your chosen support cards (excluding Friend supports), you will also be joined by the story characters Haru Urara, Rice Shower, Matikanefukukitaru, and Taiki Shuttle as well as several more random characters throughout your journey. 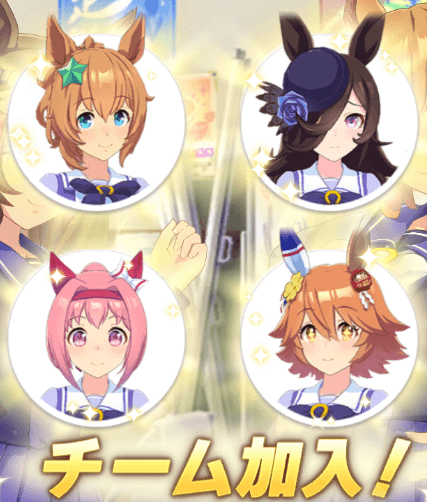 It is important to note however, that the only team members that possess a bond gauge will be your chosen support cards. The other team members do not have these gauges, and as such cannot be used in friendship trainings (also known as "rainbows"). They can still participate in Aoharu Special Training and Spirit Explosion, also explained below.

As mentioned before, every six months of your journey through the Aoharu Hai you will face a set of races not unlike those of the team stadium (the "default" PvP mode). You can see how many more turns are left until the next set below the standard objective timer.

For these races, however, you won't be facing teams of other players, but can choose from one of three NPC teams, with the topmost being the strongest and the lowest being the weakest. Depending on which of these you choose, your own team's league rank can be raised further. 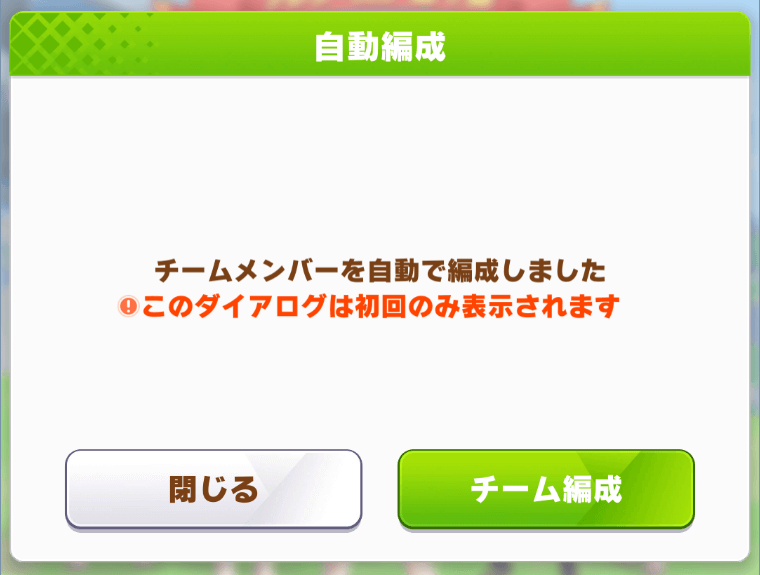 If you want to disable this (saved for the current run only), there is a button for it on the bottom left of the team menu. In this same menu, you can also assemble groups of three for the disciplines of Short, Mile, Medium, Long as well as Dirt races, just like the Team Stadium.

The difference is that here, you can set characters represented by support cards (or story/random team members) as part of a race group. What this means for characters that are still unplayable is that you can actually confirm their track, distance, and strategy aptitudes beforehand. Unless Cygames decides to change these for when their playable versions are released, this should prove to be very convenient for planning who you might want to save for. 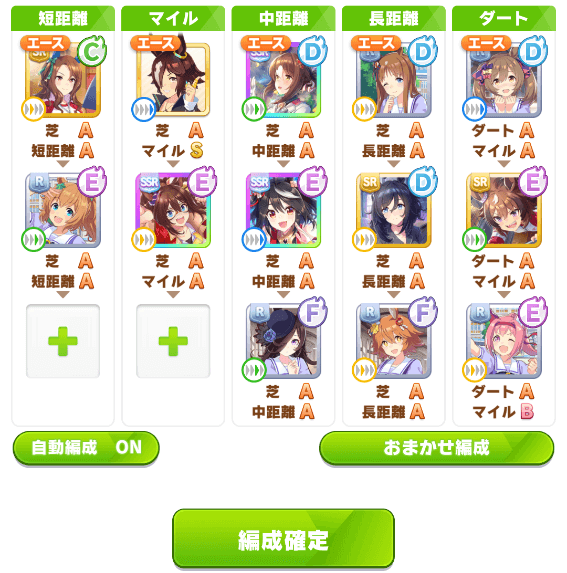 Similar to the character you are training, the other characters will all possess their own values for the standard statuses Speed, Stamina, Power, Guts, and Wisdom, but will in addition to that also be given a rank based on an average of their statuses. These statuses as well as their rank can be raised by performing Aoharu Special Training with them. The initial values as well as their maximum are not dependent on the level or limit break of the support card. 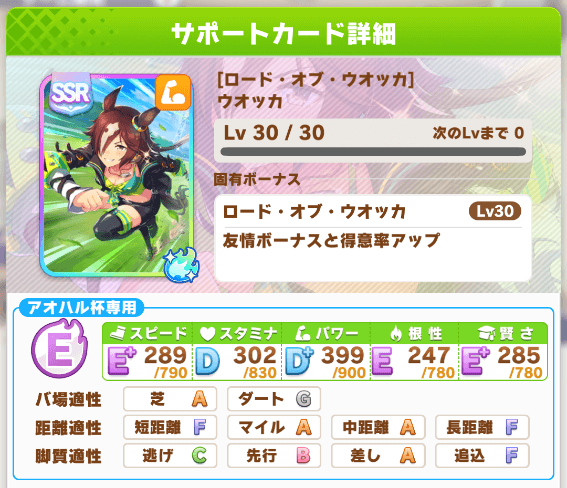 For the race itself, you can select one of the three NPC teams. On the bottom right is the league rank that you will rise to if you can manage to beat them, which means winning at least three of the five races.

Tazuna will also give you an overview of your chances of beating the selected team in each of the respective disciplines. Be aware that your league rank will decrease if you lose, so take this as an indicator of who to pick as your opponent. To be generally on the safe side, you want to see at least three double circles in total here.

After confirming, you will enter the team race menu and begin to race. The pink button on the left allows you to view the main race (the race with the character you are training) in full, whereas the right button only shows you the results for all five races. You cannot view the non-main races.

Each Aoharu Hai team race ends with a summary of your result as well as a few new random characters joining your team, to be used in following status trainings and other team races.

In the URA scenario, the only characters that can appear in a training are your support cards and the story characters. In the Aoharu scenario, all of your team members can show up as well.

Sometimes, your team members (including your support cards) will have a white flame icon in the top right corner. That means that they're available for the Special Training.

If you do the training with them (while they have the icon), the team member's spirit gauge will increase, and they will gain some stats. The stat increase will happen in all categories, but an extra bonus will be given to the specializations of the facility you did the training in (for example, doing speed training will yield extra speed and power).

Stats are crucial for improving their personal abilities for the league races (and raising your overall team level), and the Spirit gauge is used to trigger the spirit explosion.

When a team member's spirit gauge is full, the next Special Training with them will unleash the spirit explosion.

Spirit explosion does three things - gives a big stat boost to the team member, a moderate stat boost to your trained character, and also provides you with a random skill hint.

The stat boosts will depend on where the spirit explosion was triggered. You don't have to trigger it at the first opportunity and can save the explosion for when the team member is in a more desirable training facility.

The stat bonus for your trained character is separate from the other stat gains (meaning you can get over 100 stats in one training). All the explosions are additive with each other (meaning you don't get any extra bonuses for doing 2 or more explosions at the same time).

Unlike the previous scenario, the levels of the training facilities are not tied to how many times you've trained in them, but instead depend on your team stat rank for that particular type of training. That means that strengthening your team will directly affect the amount of stats you get from training.

This is how the training facility level is determined:

So for example, if your team rank for speed is A, your speed training facility level will be 4.

During an Aoharu Hai training run, you will get multiple opportunities to obtain scenario-related skills.

Awarded in the Senior Class, second half of November. The skill is randomly picked from your highest team stat rank.

Triggering 4 to 9 total spirit explosions during the run awards you with a normal rarity skill hint. The hint will be level 1 for 4-6 explosions, and level 3 for 7-9.

If you trigger at least 10 explosions, you will instead be awarded the appropriate rare (gold) skill hint. The hint will be level 1 for 10–12 explosions and level 3 for 13 or more.

You can pick a name for your team during the Junior Class, second half of September. The Character must be either your trained uma, or one of your support cards, otherwise you can't select the corresponding team name. If you manage to win the Aoharu Finals, you will get a gold skill depending on your team name.

If you manage to get an S rank in overall team stats, you will automatically get an event that awards a hint for the skill. This hint is normally at level 1, but will be level 3 if you're training one of the scenario story characters (e.g. Haru Urara).