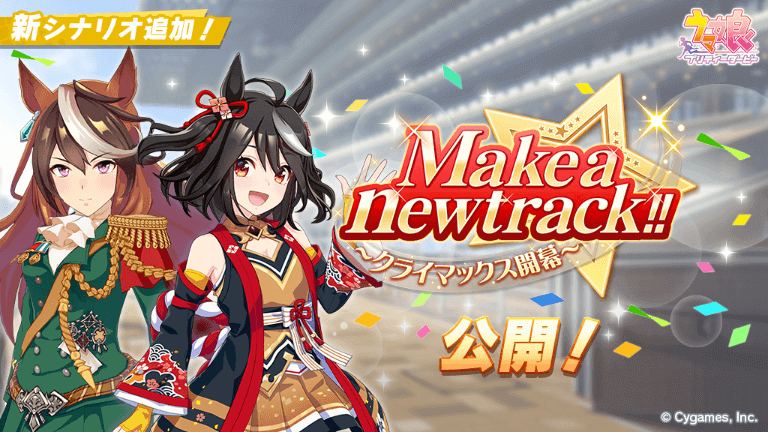 Make a New Track is a new Uma Musume scenario released on February 24, 2022. After URA Finals and Aoharu Hai, it's the third permanent scenario added to the game.

Its mechanics are quite different from the previous scenarios, so while knowledge about the basics of playing the game is required, you do not need to know any information about the Aoharu Hai scenario to play this one. Please read the Beginner's Guide first if you need a refresher on the basics.

The Make a New Track scenario revolves around races. There are no character-specific objectives in this scenario like in the previous two, and you will instead be tasked with collecting Grade Points (成績Pt) before reaching specific deadlines.

This means that characters are not locked out from any race due to conflicts with pre-scheduled objectives, and can now get all race-related trophies in the game.

There are a total of 4 objectives for this scenario. The first one has you participate in the Debut race as usual. The second objective requires you to collect 60 Grade Points, and the third and fourth both need 300 Grade Points.

Surplus points from a previous objective do not carry over. You need to collect these after the start of each objective.

Unlike the previous two scenarios, there are no new original characters connected to this scenario, and there is no Scenario Link mechanic attached to it.

As you've probably guessed, you can get Grade Points by participating in races—any races. The number of Grade Points you can gain via a specific race is indicated by the Star icon with the letters "Pt" on it in the race selection, and depends on its grade rather than on the specific race.

If you don't win the race, you will still be awarded Grade Points, but the number will be proportionally lower based on your final placement, similar to fan gain.

The same goes for Shop Coins (ショップコイン), another new addition to Make a New Track that you can get by participating in races. These are indicated by a green circle icon with a fan on it. Races of all grades award 100 Shop Coins for placing first, and proportionally less for placing worse than that.

Here is a breakdown of how many Grade Points you will gain for placing first across different race grades, and how many Shop Coins you'll obtain depending on your position:

As just mentioned, participating in races will grant not only Grade Points, but also Shop Coins. These coins can then be spent in the Special Shop, the button of which is located between the Race and Outing button of the main menu. This will be locked before the debut.

The items you buy here can grant various bonuses to your current run. The lineup for the shop is randomized, and will change every 6 turns. You can confirm when the lineup will change by opening the Special Shop menu and checking the top of the purchase button.

You can't hold more than five copies of an item at once.

Additionally, the shop may sometimes offer limited items, whose availability is separate from the rest of the lineup, or sales, during which you can get items at a 10-20% discount.

You can view or use your items by clicking the button to the left of the character overview button on the main menu (right above the counter for the Wisdom status).

Alternatively, there's the same button in the shop menu, also located to the left of the character overview button (right above the shop's lineup of items).

Items that span several turns cannot be used while their effect is still going on, and items that improve a specific type of status training for a single turn can only be used once a turn.

The effects of items that raise the level of training facilities and those that raise bonds are permanent for that training run and cannot be lost. Conditions gained through items will persist until they are lost some other way (such as losing Good Training through failing a training).

Here is a breakdown of all items that can appear in the Special Shop, including their names, cost and effects:

Sometimes, a random race will feature a "rival". Whenever at least one race with a rival is available, a red and blue jagged speech bubble with "VS" written on it as well as a shimmering effect will be visible on the race button in the main menu.

Winning against a rival will award you with one random skill hint related to either the distance of the race or the strategy you used in it. The game counts placing 1st against a rival as a win, placing better than them but not 1st as a draw, and placing lower than them as a loss, similar to legend races.

The final part of the Make a New Track scenario is called the Twinkle Star Climax. It's separated into three individual races.

Unlike the previous scenarios, the finals here are not an elimination tournament, but more of a mini-league in which you fight for the top spot on a leaderboard. Whoever sits at the top of the leaderboard at the end of all three races wins. 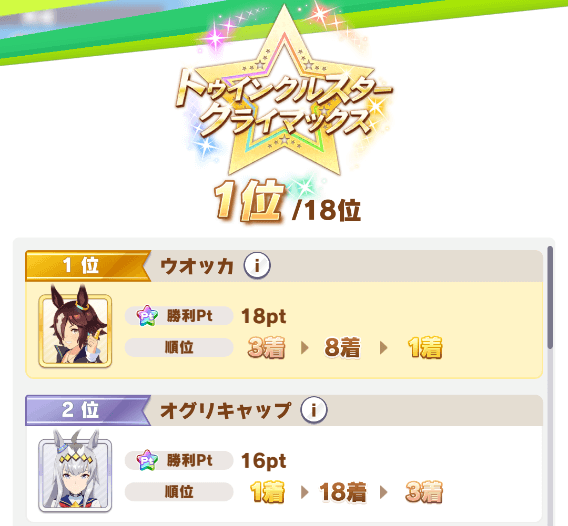 You don't always need to win all three races, as long as you still have the most Victory Points and thus the first spot on the leaderboard by the end of the third Twinkle Star Climax race.

The distance and terrain of the Twinkle Star Climax are decided by the races you participated in throughout the three years of training, similar to both the URA Finals and the Aoharu Hai scenarios.

Winning the Twinkle Star Climax will award you with a hint for the skill. Hints for the normal version of this skill, , can also be obtained via training events related to unique skill level-ups throughout the event; see below.

Here is a breakdown of what placement will award you with how many Victory Points:

The level-up condition of unique skills in Make a New Track differs from both the URA Finals and the Aoharu Hai.

In Make a New Track, a training event to determine the "Junior/Classic/Senior Horsegirl of the Year" will occur in late December of each year of training. If your character is picked to be the horsegirl of the year, your unique skill will receive a level-up, and you will receive a hint for the skill .

So far, whether your girl is picked or not seems to be based on both the bond level of chairman Yayoi Akikawa as well as some combination of fan count and number of races won within the respective years. How many fans and races are necessary for each year is still unclear, so simply try to win a few races every year for now.

Here is a breakdown of what bond level you need for the chairman for each of the years:

Similar to the URA Finals scenario, the level of training facilities in Make a New Track will rise depending on how often you train at it. All facilities start at level 1 and level up every four times they are used. That is to say, training Speed four times will raise its level from 1 to 2, another four training will increase the level from 2 to 3, and so forth. This goes on until level 5.

As of writing this article, character-specific events, such as Narita Brian winning the Triple Crown giving her a +5 Bonus to all statuses, 50 Skill Points, and 4 random skill hints, cannot be triggered in Make a New Track. Right now, it's unknown whether this is a bug or intended.

The Make a New Track scenario includes several scenario-specific nicknames. When you achieve these, a special event with chairman Akikawa Yayoi occurs, and you will be granted various bonuses. You can find a list of these nicknames, their requirements and the bonuses in the nickname list.

The Scenario factor that can be gotten from Make a New Track is called "Climax Scenario" and will grant Stamina and Guts on successful inheritance.